Of course those were pre-internet days and we writers had some bargaining power. Not so for many of the young ladies who were featured in the magazine. Almost all of them were unpaid models and they didn’t complain. Somehow, for these young ladies, having their pictures appear in magazines was such a huge honour that they would do it for free.

If there are people willing to do it for free, why pay? It’s a nobrainer for these publishing houses. I suspect that little has changed even with Instagram where the majority of people who follow you are idiots who unfollow you the moment you reciprocate. As long as there’s a constant supply of young ladies desperate for a little polished publicity, the supply of unpaid models will not run out.

But the exploitation has gone one step further. The once coveted pageant crowns are no longer worth fighting for as opportunities for the winners fizzle out, be it in entertainment or business circles. With little to attract sponsors and contestants, prizes are devalued, further discouraging participation. Today’s organisers of beauty pageants have very little to offer the contestants. Prizes (if any) can be withheld almost indefinitely. A bleak picture is painted here by Ms Kuek Ziyi.

You heard her right. No prizes. This was not the first time and won’t be the last. How much money can a sponsor afford to sink into such events? Can they even put up a good show given the expected ROI is meagre? Check out the Miss Bikini Universe Singapore 2018 finals, only available on YouTube and not Mediacorp. You be the judge for this one.

I won’t say who, but there are cringe-worthy moments in this pageant (and we’re talking about the finals for crying out loud!) and like me, you may be wondering how some of the contestants could ever end up there. For a bikini competition, the contestants must at least look athletic to even clear the audition. What happened? Not enough contestants? Nevertheless, I agree with the judges. Feline Wong deserved to win and I would have made Andrea Wong the first runner up as well.

Now comes the juicy part. Feline Wong did not hear from any of the “sponsors” after winning her title (except one). She also didn’t hear from the organiser who was supposed to pay her the $1000 prize money. She was asked to wait for a week and after waiting for more than 2 weeks, there was still no sign of her cheque.

Yes, what did organiser’s “national director” mean by “backstabbing”? I’m sure nobody finds it unreasonable for the winner to ask for her prize money after failing to receive it and the “national director” seemed to be dragging her feet and avoiding the issue. They are obliged to pay her the money and the “done so much for you” is not the issue here. Can I tell my maid that I’ve “done so much for her” or “done everything I could to provide” and not pay her her monthly salary? Feline Wong has every right to be upset.

They should have apologised for the late payment and paid up promptly. But no, they chose the cheap and low way out.

Mothership called it a shocking decision, but frankly, I’m not surprised by this move from the “national director” after reading the WhatsApp messages from her. It’s a cheap, vindictive, unprofesssional move that is rather characteristic of some of the folks in this business.

Naturally, Miss Wong would protest against the move. She had merely pestered them about the prize money and she wouldn’t have done so if they had just paid up. But as they all say, the judges’ decision is final. Of course in this case, I’m not sure if the judges had actually been consulted. The official letter of dismissal is captured below. 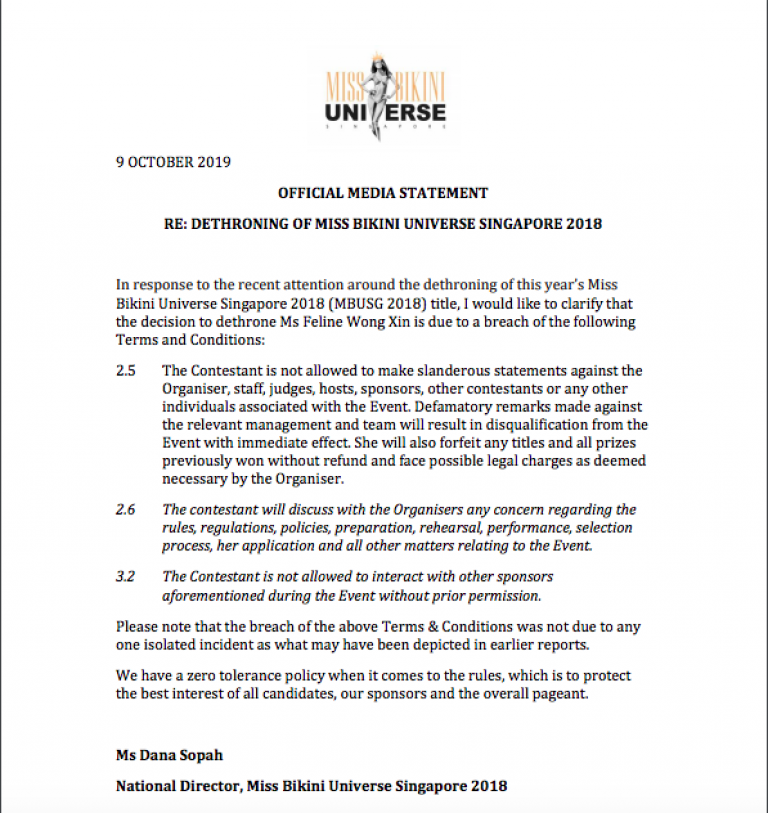 I remember Dana Sopah as a model. Anyway, a robust reply from Miss Wong followed and the initially censored lines further revealed the sorry state that the pageant was in right from the start. They didn’t even have enough participants and had to enlist Miss Feline Wong’s help to bring in some friends. Was there a selection process, a quarter final, a semi final before the final competition? We can only guess, judging from the standard of some of the finalists.

Miss Feline Wong stood firm, refusing to return the crown, the sash and most insultingly, the cheque board. To her, it’s a matter of principle. She didn’t think she had done anything wrong by pestering them for late payment. Even though her English is less than perfect, I respect her for standing up against unethical practices. She probably felt safe from litigation. Since they can’t afford to pay her $1000, they obviously can’t afford lawyers.

The organisers would have another dirty trick up its sleeve, which further calls their financial position into question. What is their purpose for getting into the game if they can’t get into it in a meaningful way?

So it’s all settled now. Andrea’s smile looks rather awkward and I wonder if she had to be persuaded to accept it. Someone asked what the crown is made of. Having seen such crowns before, I can tell you that it’s made of plastic beads strung together with fishing line. I’m not sure when this Miss Wong is going to get her money (organiser claims that she will be paid after the international competition in China in 2019), but accepting the silly-looking crown and a ridiculously late payment date is like acting really desperate. 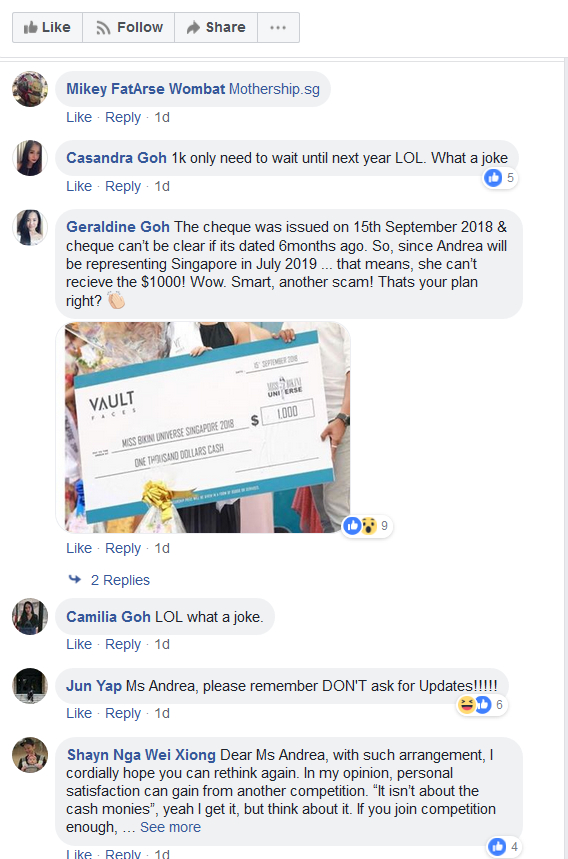 She reminds me of the girls who posed for publications for free just to enjoy the pure ecstasy of seeing their pictures published. With one’s beauty, body and brains, there are ample opportunities out there. What’s the big deal?