As you can see from the trailer, it’s a pretty sexy and violent movie rated R21. What is it about? Love, jealousy, hate and murder. Before you get too excited, the plot is one that has been done to death – no pun intended.

The movie opens with a narration by Ah Wu (Louis Wu), a young and suave and handsome funeral director. Mia (Rebecca Chen), the sexy, voluptuous wife of BBQ meat (siew lup) seller Ah Quan (Sunny Pang), pays him a visit to engage his services for her recently departed mother. The two get along very well and Ah Quan notices.

Meanwhile, business is brisk at Ah Quan’s siew lup stall. However, many of Ah Quan’s male customers seem to be there to satiate a different kind of hunger. When the stall is shut and they retire to bed, Ah Quan tries unsuccessfully to have sex with Mia. She mocks at his impotence. He beats her up. She then visits Ah Wu at the funeral parlour. He treats her injuries and reveals his feelings for her. He asks her why she’s still putting up with an abusive husband. She explains that she feels indebted towards him because he’s the one who rescued her from prostitution. 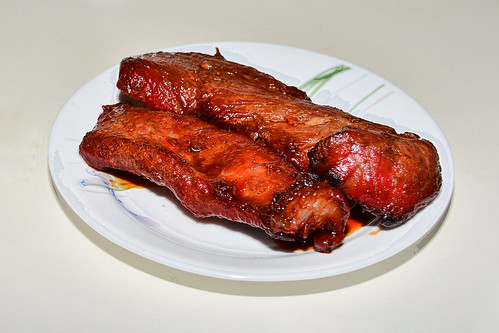 The viewer is then treated to a flashback. Ah Quan’s buddy Ah Gao is a private eye hiding in a hotel to gather evidence of his client’s husband’s infidelity. He captures a secret footage of his target making love to Mia who is a prostitute then. Gao not only shows the footage to his client, he also shows it to Ah Quan who is so captivated by Mia’s figure that he wants to book her. Sadly, Ah Quan fails to have sex with Mia because of his impotence. Strangely, he wants to marry her and is prepared to pay her pimp $50,000 to buy her over. Her pimp refuses at first, but Ah Quan puts his cleaver to his head to make him change his mind.

Somehow, the impotent Ah Quan thinks that they can live happily ever after. Ah Wu visits the siew lup stall frequently and watching from a distance, Ah Quan’s jealousy grows. There’s another scene of violent beating and attempted rape and Mia finds refuge in Ah Wu’s bed. A few steamy scenes and Ah Quan suspects infidelity. What follows is another attempted rape, this time by the sneaky Ah Gao who is always videoing people making out. He gets kicked in the groin and rather abruptly, Mia runs to Ah Wu and tells him that she wants him to help her get Ah Quan killed. 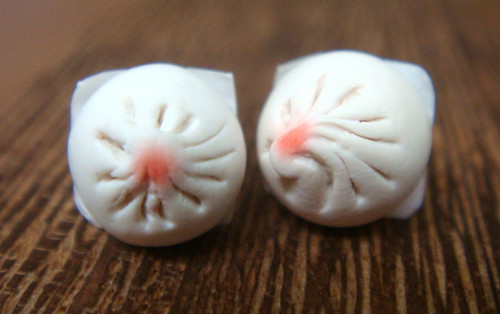 The gentlemanly Ah Wu cannot get himself to commit murder. It’s Mia who suddenly turns violent. She not only kills her husband, she cuts up his body parts and roasts them to serve customers at the siew lup stall. They seem to love the new taste. Ah Wu is shocked by the drastic transformation. From a timid, battered wife, Mia has turned into a butcher.

Ah Wu thinks that he can put the past behind him and live happily ever after. That’s when he meets another client who is planning her own funeral as she is diagnosed with an incurable illness, given only a year to live by her doctors. She is kind and demure. Ah Wu soon falls in love with her. His lovemaking sessions with Mia becomes dull and routine. Then, the sneaky Ah Gao rears his ugly head and reveals his suspicions about Ah Quan’s whereabouts and threatens to tell on her. He then rapes Mia at knife-point. Then, out of nowhere, she pulls out a hidden knife and kills him. More roast meat. 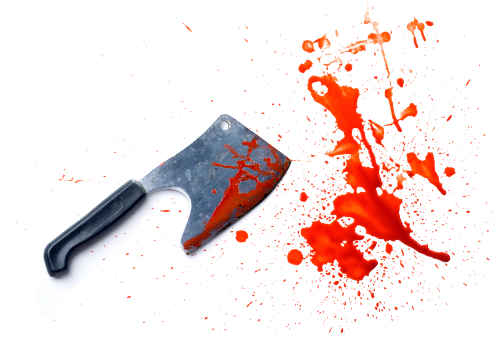 Finally, Mia discovers Ah Wu’s affair. There is no surprise to spoil here, only that this is probably the first time I encounter a narrator who is dead in the end. He says that his life and his story may have ended, but for Mia, it has just begun. A sequel? Give me a break!

Before I begin my next segment, let it be known that I’m not an expert in film-making and I’m not even a movie buff, so forgive my lack of proper terminology. The following analysis is made from the viewpoint of a storyteller.

The concept of human char siew pao dates back to the heydays of Cantonese (HK) Catergory III horror movies. These flicks were inspired by a mass murder with suspected cannibalism at an eatery in Macau in 1985. Dozens of other trashy movies with variations on the same format emerged. To say that Siew Lup lacks originality is probably an understatement.

The opening scenes were handled quite well by Louis Wu. The narration was fluent and sincere. Rebecca Chen has come a very long way in the freelance modelling industry, but this is the first time she appeared on the big screen. Rebecca’s emergence on the scene seemed a bit jarring. She didn’t sound very natural and many parts of her dialogue appeared to be dubbed. As the story unfolded, credibility issues started creeping in. Siew Lup is set in present-day Singapore – hardly the sort of place you need to resort to murder to get out of an abusive, sexually frustrating marriage. The script may have taken a bit too much from the Pan Jin Lian and Zhang Yimou’s Judou era.

The flashback made the story even less credible. Showing Mia’s past and including a useless character like Ah Gao actually weakened the story. The script tells that Ah Quan fell in love with Mia, but I couldn’t see that happening before my eyes after an unsuccessful session they had in bed. Something must be shown to convince us that impotent Ah Quan had indeed fallen in love with a prostitute and he was prepared to pay $50,000, not to check into some urological department but just to buy her out from her pimp. Again, the Pan Jin Lian template has not been adequately modernised. Sunny Pang’s acting is not too bad, but his character gave a poor showing because of a shoddy script.

One rainy night, after running away from an attempted rape by Ah Gao, Mia sought Ah Wu’s help to kill her husband. From this point onward, Rebecca’s acting took a turn for the better. I find her far more convincing as a deranged serial murderer than she was as a silently suffering damsel in distress. However, the switch was not well managed. Mia didn’t even sound serious when she told Ah Wu that she wanted to kill Ah Quan. I couldn’t see the gradual build-up. I fail to see how a man like Ah Wu could be persuaded to murder with just a few feebly spoken words.

Then, there was the drama of the murder. The action sequence was quite well choreographed. I believe I heard a scream in the audience (14 out of 78 seats occupied). Mia butchered the body “professionally” but Ah Wu was nauseated. They were happy for a while, then a new love interest emerged and the ending becomes painfully predictable.

Like Rebecca Chen, Melody Low is a seasoned model, albeit quite new to acting. She played the dying girl (unconvincingly) who had an affair with Ah Wu. I’m not being mean by saying this, but Melody is worse than Rebecca. She can’t act to save her life! Her diction is so bad that I wonder why director Sam Loh couldn’t have found a more suitable candidate for the role. It could have been a “business decision”. Both Melody and Rebecca have thousands of fans on their Facebook pages who could be “baited”. 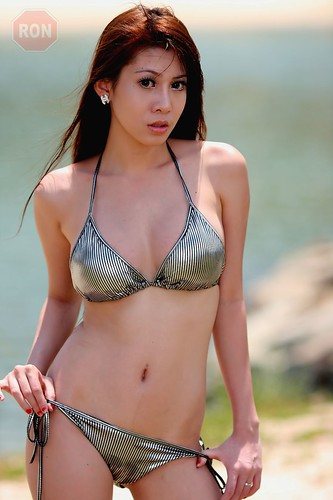 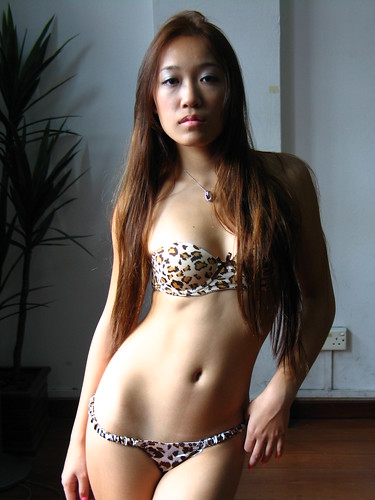 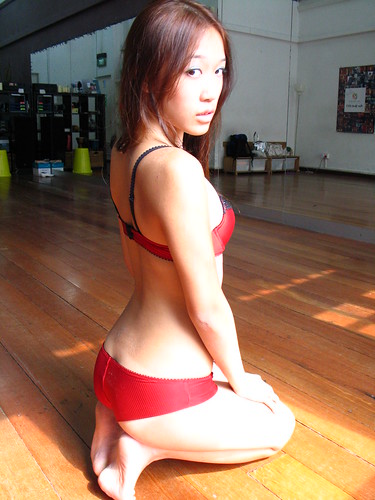 Of course for a movie like this, the audience should have been advised to check their brains at the door, but what about the titillation value? Some folks out there may be tempted but afraid to ask, how much can you see? Check out the following interview which was conducted before the film was released.

You get the picture? Like the some of the tamer, low-budget Category III HK movies, Siew Lup has a fair bit of lame sex scenes which are so fake that they may make a kid laugh. In fact, there were too many of these lame sex scenes when a few good ones would have worked better. Rebecca didn’t bare her breasts completely until she got into bed with Louis. With Ah Gao and Sunny, the nudity was more limited and the action quite brief. Those looking for titillation may be disappointed. I got my money’s worth by having so much to write about.

Having said all that, this is probably the first time a local movie for mature audiences did not bother to make any attempt at artistry but instead pushed the limits of exploitation. It’s not something I can be proud of as a Singaporean, but at least we have something in that genre now.