I just bought myself a Samsung J7 – the smartest phone that a dinosaur like me had ever bought. But as usual, I pick up these things quite quickly. After installing Wechat (微信), I started exploring and discovered a very interesting function called “Discover > People Nearby”. It works like a radar and scans your vicinity for other users. You can check out their profiles, albums, updates, quotations and add them as your contacts just like any social media platform.

Anybody who has experimented with the Discover function is sure to notice the prevalence of images of attractive women, all vying for attention with their digitally enhanced images. If you study their profiles and “albums” closely, you’ll realise that many of them are trying to use Wechat as a platform to promote the products they’re selling. From investment services to nutritional supplements and even sex toys, there is wide variety of goods and services available. Very often, the woman or women in the pictures have nothing to do with those products.

Apart from these goods and services, there also appears to be many bored and lonely women with their gentle gripes and enigmatic statements which often reveal their self-centredness, immaturity or even insanity. Below are a few examples which I had posted on Facebook earlier on. My own comments follow the quotes.

Yes, I was not afraid of getting that virtual slap on the face. I actually replied to some of them. As you can see from the meanness of my replies, I’m not at all interested in playing Romeo. Surprisingly, I got pretty positive responses from some of them.

Before I go any further, please check out this piece of news in case you’ve not read it before. Even if you’ve read it before, it’s good to recap.

I thought the perpetrators have already been nabbed and prosecuted, but looking at some of the profiles on WeChat, it seemed to me that these sex scams are still very much alive. I decided to do a little of my own naughty investigation. 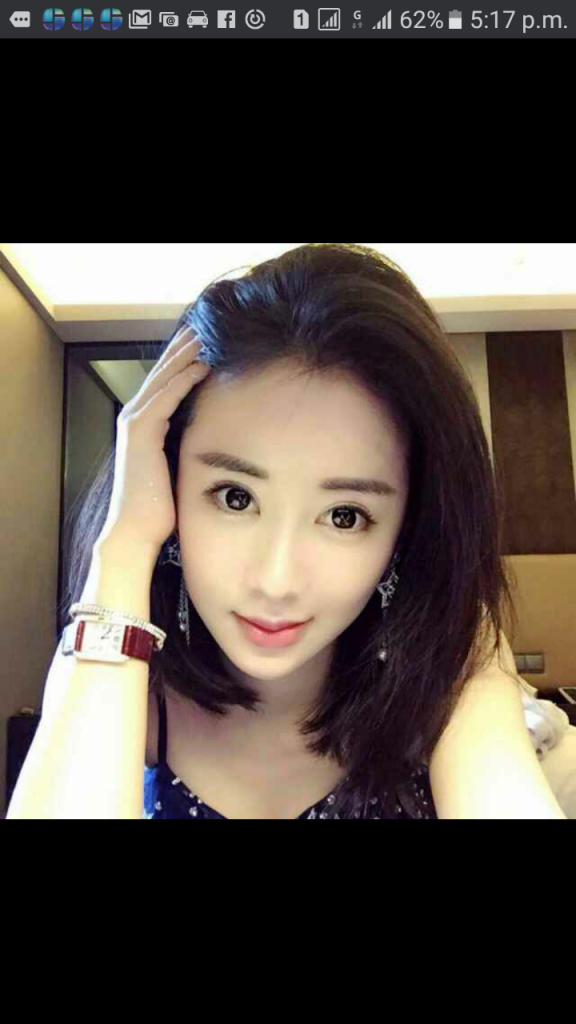 Meet “Mu Qing” or whoever “she” wanted us to believe “she” is. I’m not sure if this is a new trend, but unlike the sexy girls reported by guys who got duped before this, most of the comely “girls” on WeChat look just like your girl-next-door, albeit with heavily doctored images. Digital plastic surgery must have been performed on the eyes and noses. Hopefully, the original girls won’t even recognise themselves. 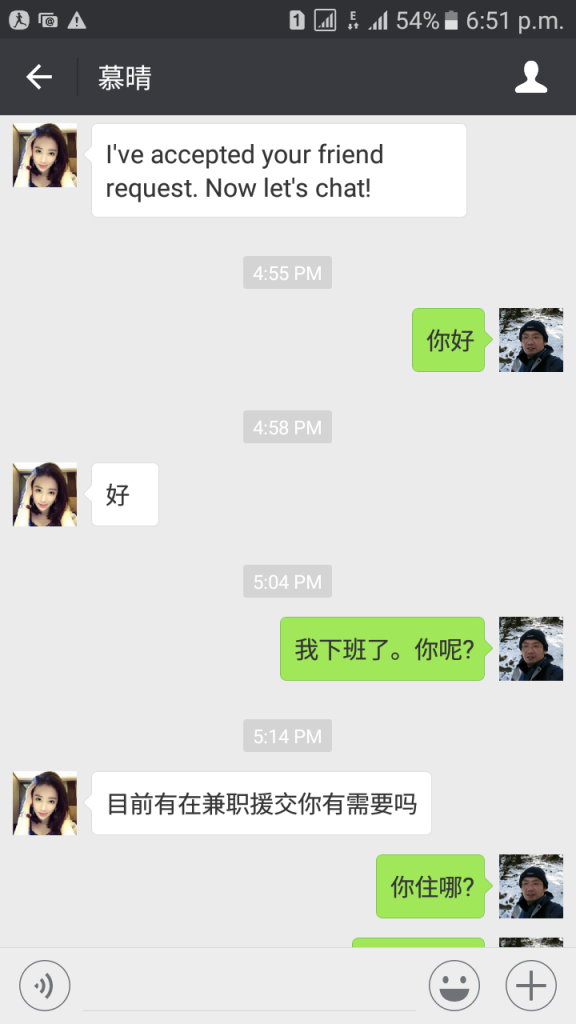 Usually, there is a lot of self-introduction, flirting and even rambling. Almost every one of them claims to hail from Sichuan. When asked which school they’re from, only one could tell me. The others all said that it was “inconvenient”.

I chose this atypically brief “case” to present because “she” was extremely to-the-point. Can you imagine? She told me she was “part-timing” and asked me if I had any “need” in her second sentence. I went straight to the point too. 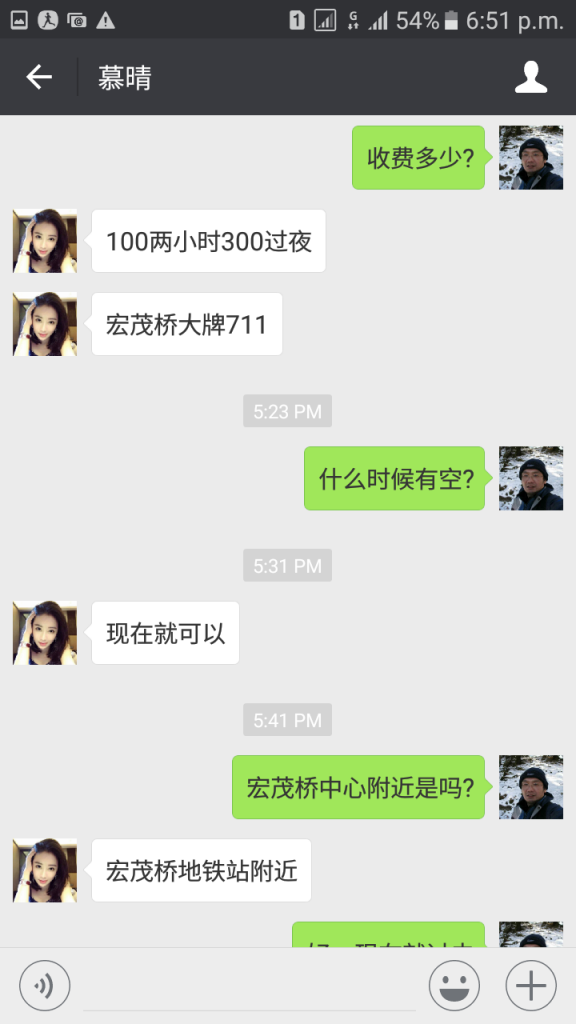 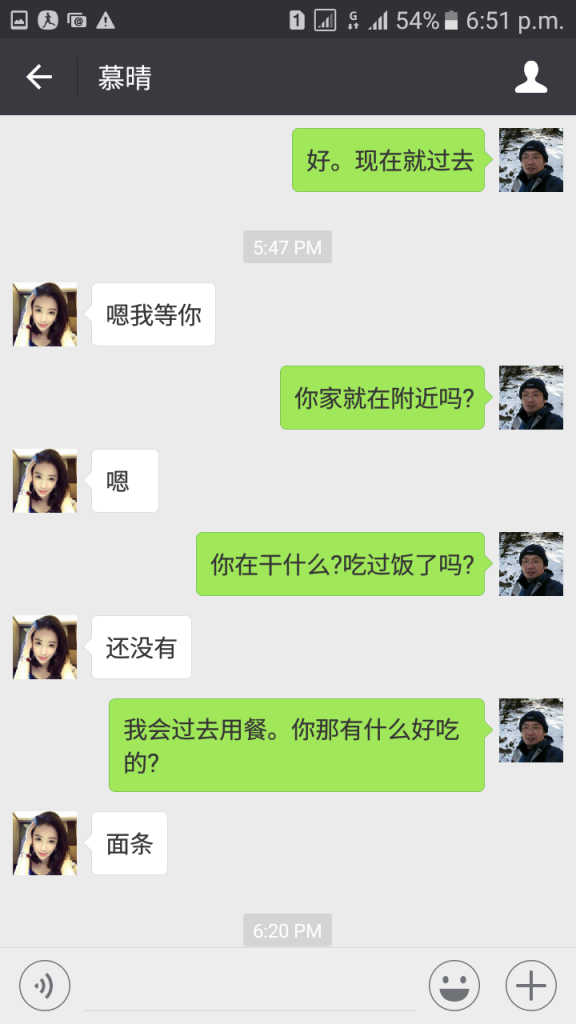 I was at Hougang, just a few bus stops from Ang Mo Kio Hub then and decided to see where this scam would lead me. I thought of having dinner there and even pretended to ask “her” for recommendations. Her curt and vague reply would have been an instant killjoy even for the gullible. 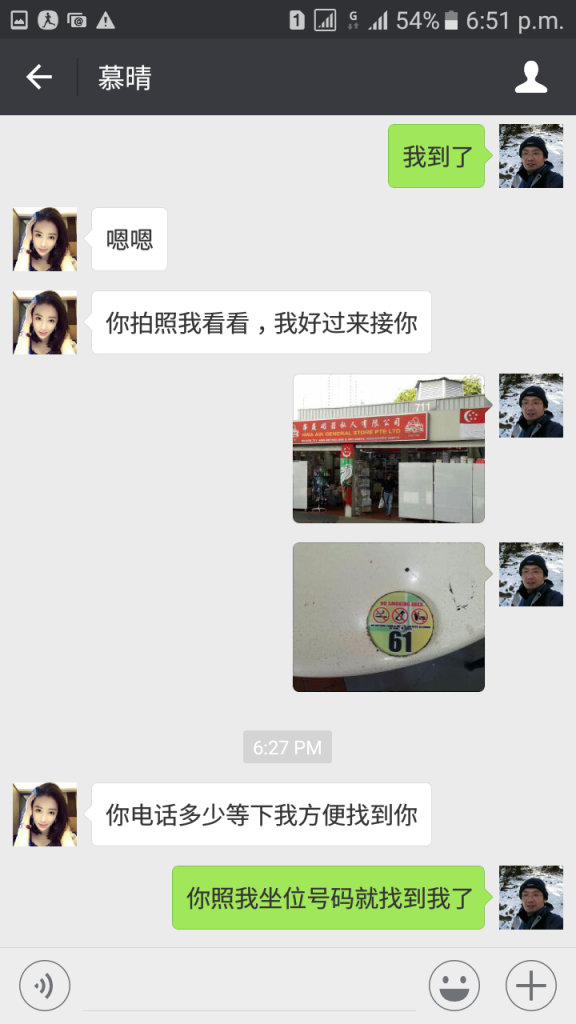 I told “her” that I had arrived. The next request from “her” is pretty standard. She would ask you to take a picture of the location so she would know where to pick you up. Actually, “she” just wanted to make sure that you have taken the bait so far. Blk 711 is a non-aircon food court.

As you can see, I not only took a picture of Blk 711, I even took a picture of the table where I sitting. So when “she” asked me for my phone number, I told “her” that it was unnecessary as “she” could locate me from my table number.

The beauty of WeChat is that as long as you don’t give yourself away in your status updates, you can be completely anonymous. You can chat with a stranger without having each other’s phone number. So what’s the purpose of getting your phone number?

She told me wait her at AMK MRT station exit B. And I reached there around 11pm. And then suddenly she texted me and said that before we can meet up, she need my contact number so that her friend will call me up just to prevent any misunderstanding. and i gave my contact.

At that time, i didn’t feel anything wrong as i know this is just for safety purposes. After a while, a Chinese man called me with ‘Private number, his name ‘Xiao Lim” something like that, he said this was my first meeting with the girl, so the deal can’t be in cash as company policy. He requested me to pay the SGD100 through AXS machine service, under Alipay.

Sometimes, the man will say that he is her boss. If you refuse to pay up, he will get aggressive and threaten to trace you from your number and harass you and your family. 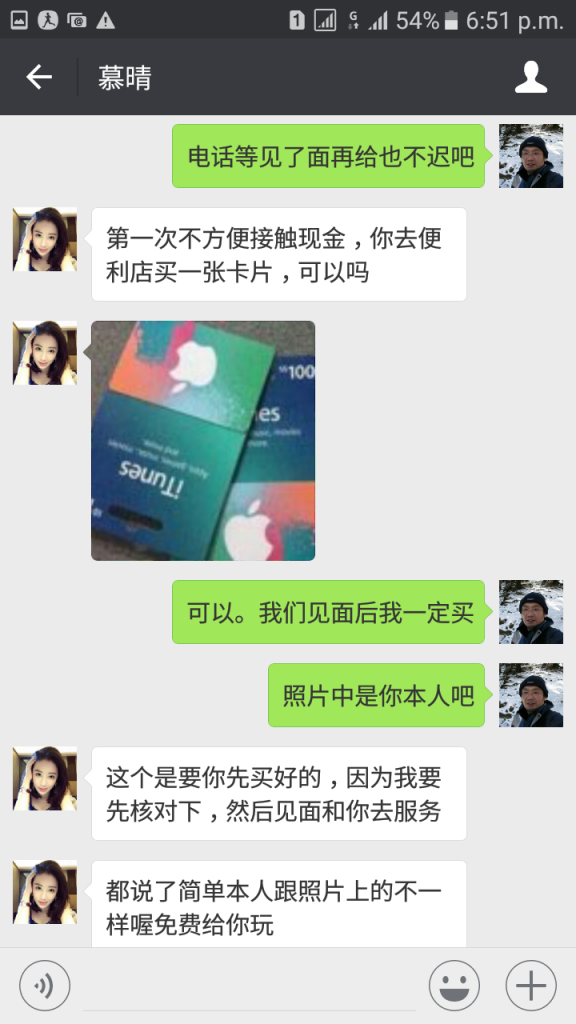 After failing to get my phone number, “she” quite stupidly jumped straight to asking me to buy “her” some itunes gift cards. I could have given “her” my phone number to see where else the game would take me, but decided against it since:

1. I had no means to record that guy’s voice.
2. I didn’t want to give them a chance to harass me. 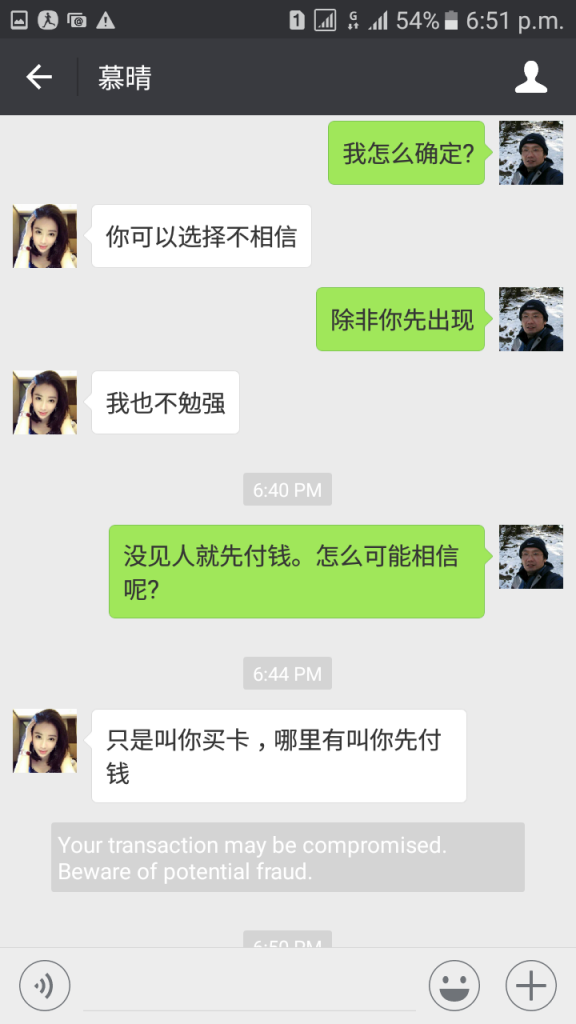 Itunes cards as a form of authentication? What sort of a lame excuse is that? But I could sense that “she” was getting impatient with this tough nut. 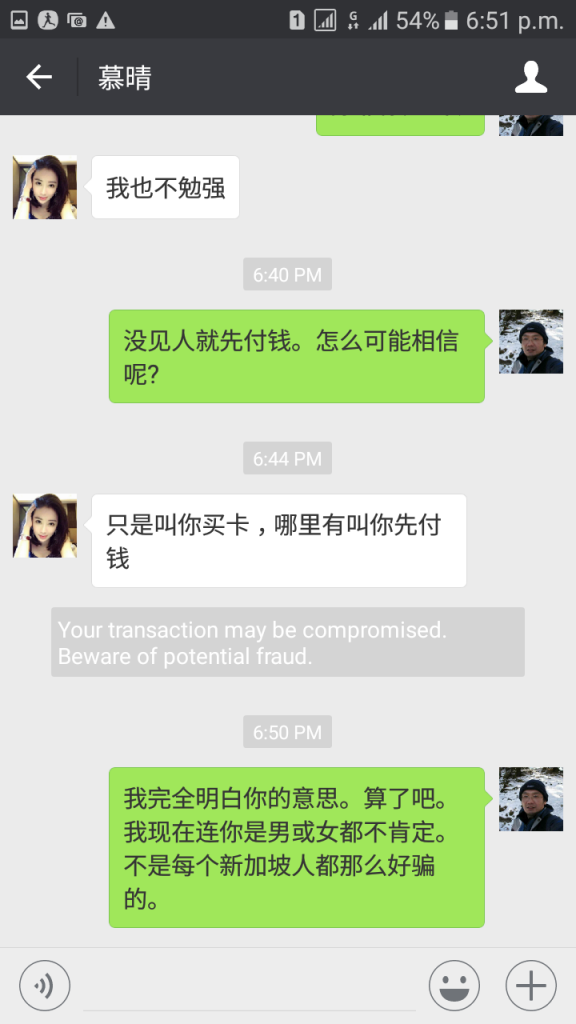 Now “she’s” trying to appear nonchalant about the whole thing. I pointed out something which should have been very obvious to the victims. How can you send money to someone whom you haven’t even met in person? How do you know if this is indeed the person in the picture? Are Singaporean men really so stupid? Why are these folks so cautious when paying fellow Singaporeans, sometimes insisting on “itemised billing” even after a packaged discount?

At this point, WeChat warned me of potential fraud (as you can see from the screenshot. I’m curious how they knew, but I was half expecting “Mu Qing” to change or delete “her” profile. 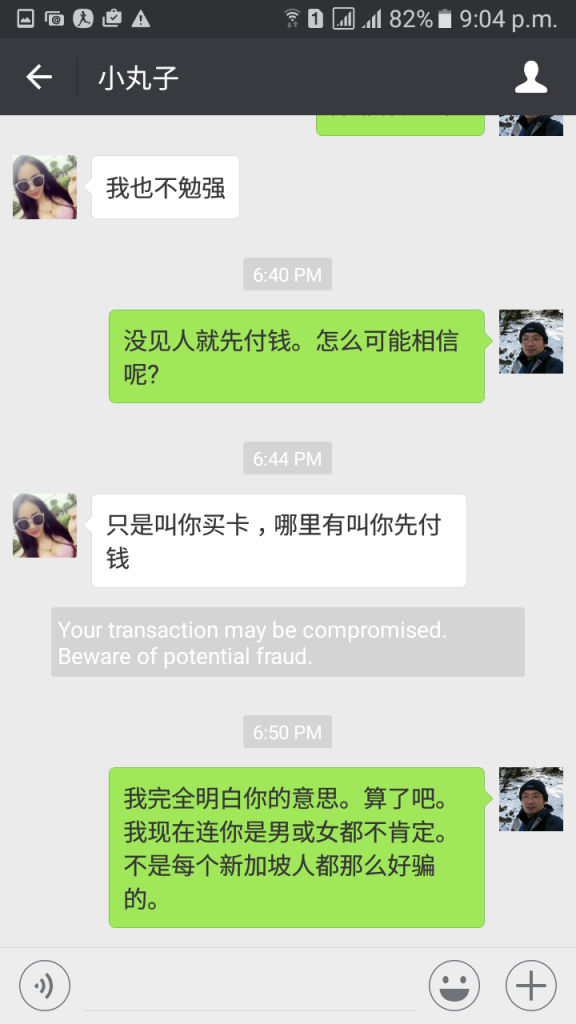 Remember this exchange? Well, it’s supposed to be my conversation with “Mu Qing”, but the profile of “Mu Qing” has been changed to “Xiao Wan Zi”! An hour or so later, an air stewardess accepted me as friend after I greeted her by asking which airline she was in. 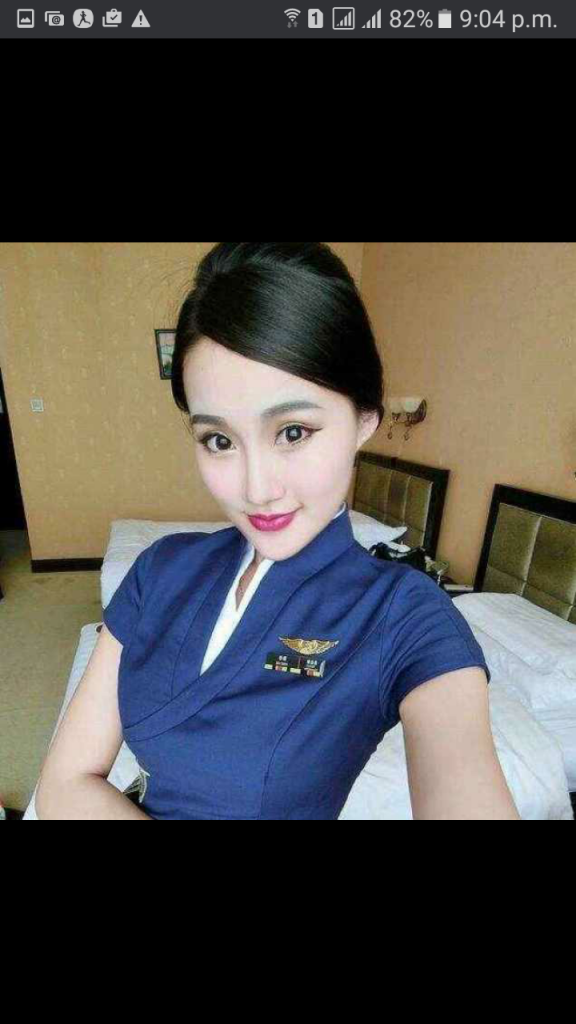 Even before I could ask “her” anything, “she” came up with a most telling statement. 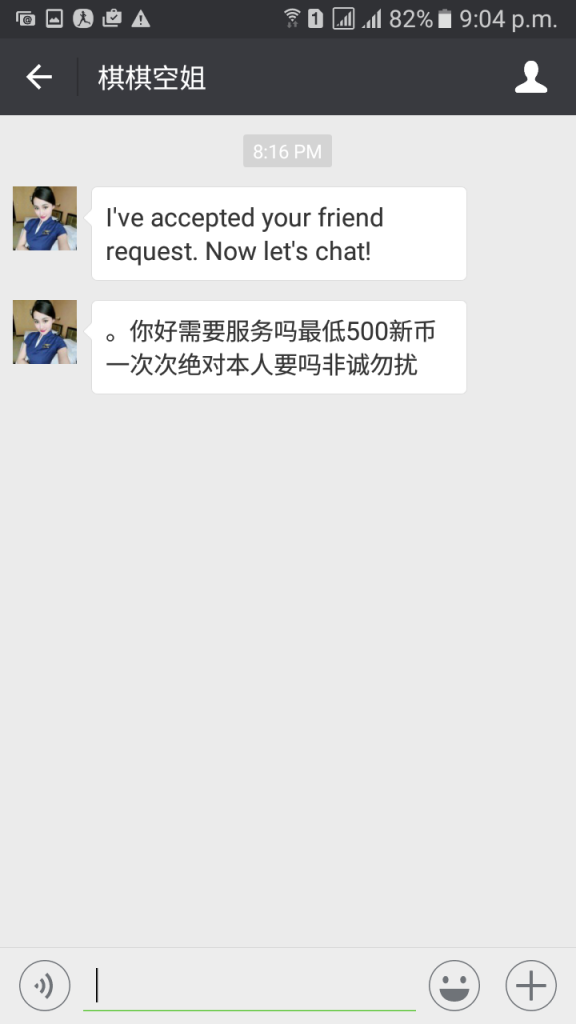 Looks like I’ve been blackmarked and the one managing this “air stewardess” could belong to the same ring. Anyway, I felt like telling “her” 还不知道不诚的人是你还是我。So how common are these scams? What is the success rate?

Maybe crazy is the word. Or desperate. Or deprived. Why are our uncles so pathetically forlorn that they would let their guard (amongst other things) down for the sake of a fantasy? Is it because the women in our society see them as so undesirable that they have no hope of a meaningful social life, let alone an exciting sex life without being called dirty old men? I dread the day when I get despised and neglected too.

National day is coming. Singapore is 51 this year. We should be celebrating our country’s achievements and feel proud of ourselves. It makes me feel so ashamed when people say that 新加坡人真好骗。 Sex scams, DHL scams …. things are embarrassing enough already. Let’s not give these foreigners another reason to con and laugh at us. Share my findings with your “uncles” and others who may be vulnerable. Happy National Day. 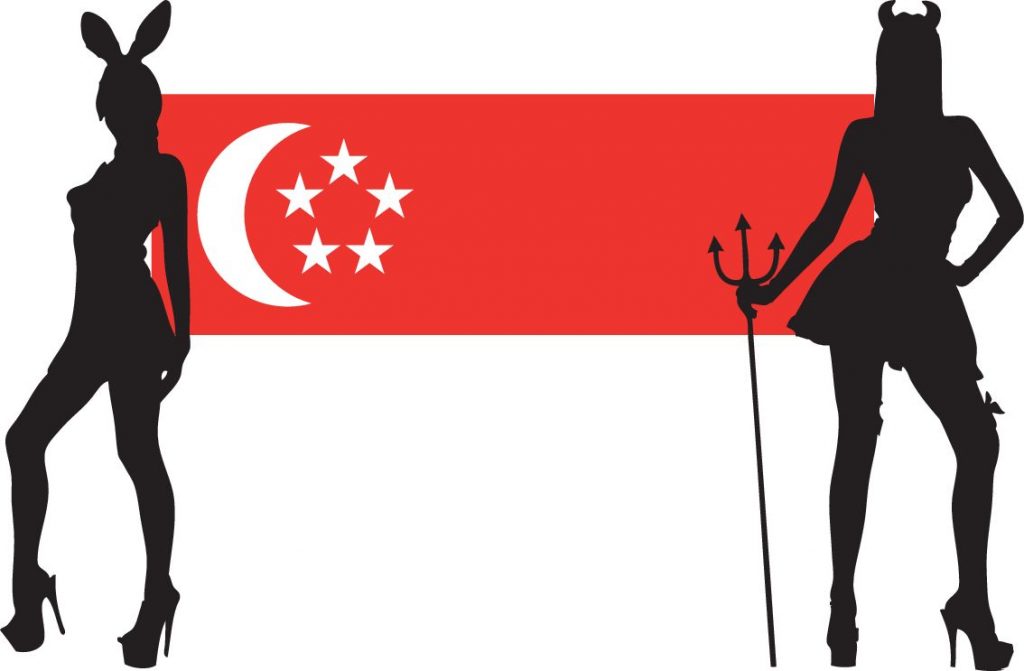