Vertically challenged and not known for his good looks, Marcus Chin 陈建彬 was not exactly the hottest star in Singapore, but dull and sanitary Singapore routinely gets excited over the smallest sin.

Back in 2009, Marcus Chin’s affair with his 26-year-old assistant Eileen Cheah was exposed. He was 56 then. By right, we are busy people and shouldn’t be bothered with frivolous matters like this, but news of Marcus’ affair triggered an uproar on social media. Busy Singaporeans miraculously found time to show their disgust. 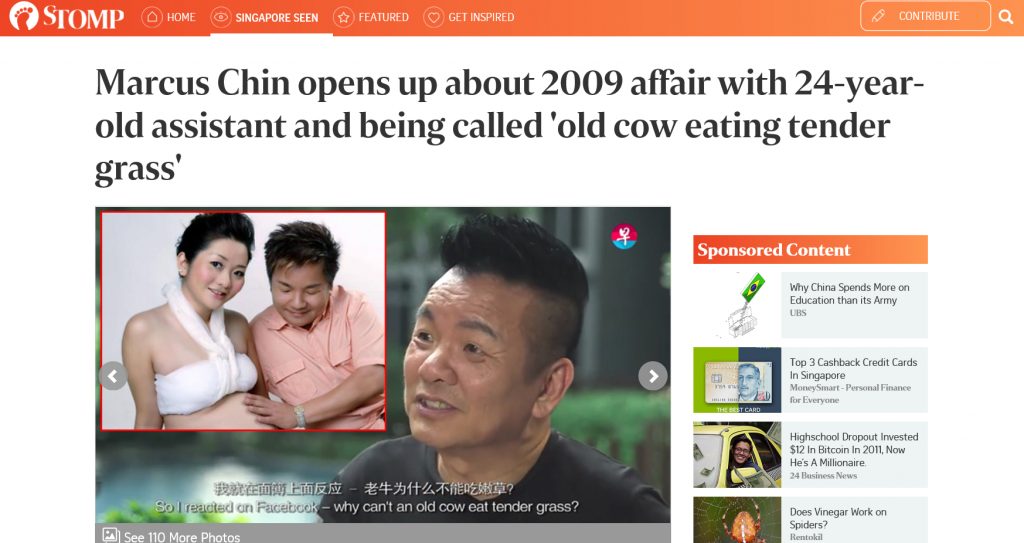 Darts of verbal venom came from interesting groups ranging from moralists and deprived singles to insecure aunties and envious men. Marcus Chin was vilified like a criminal and it’s easy to imagine how he must have felt. The most interesting remark from netizens was 老牛吃嫩草. The old bull refers of course to Marcus Chin and the tender grass refers to his young lover. The English equivalent is a lot less colourful – “cradle-snatching”. Being that willful, independently-minded host and comedian that he is, Marcus Chin did not take that remark lying down. I remember seeing him respond to that remark with the rhetorical question “What’s wrong with an old bull eating good grass? Would you rather eat tender grass or old grass?”

This only added oil to fire with absolute strangers pouring in to aggressively defend his estranged and ostensibly wronged wife. More angry netizens joined in, some threatening to boycott his shows and worried about his career in Singapore, the normally freewheeling Marcus eventually went on TV to apologise for his remark and assured everyone that he would do the “right” thing, making generous offerings to support his wife after their divorce.

Things started to cool off after Marcus Chin’s appearance on, but a bunch of film makers decided to capitalise on the 老牛吃嫩草 saga and made a movie with apparently the same theme. I’m not sure how well the movie performed in the box office, but below is my review of the movie 老牛与嫩草 after watching the DVD I borrowed from the library. 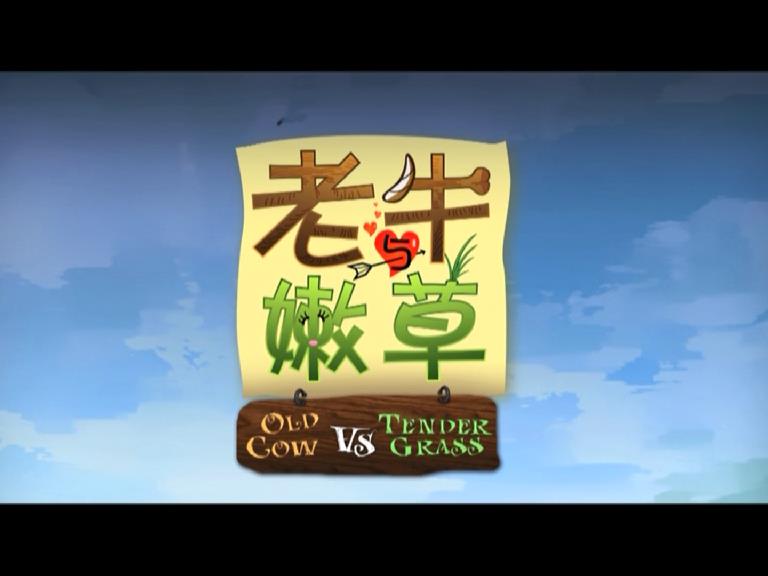 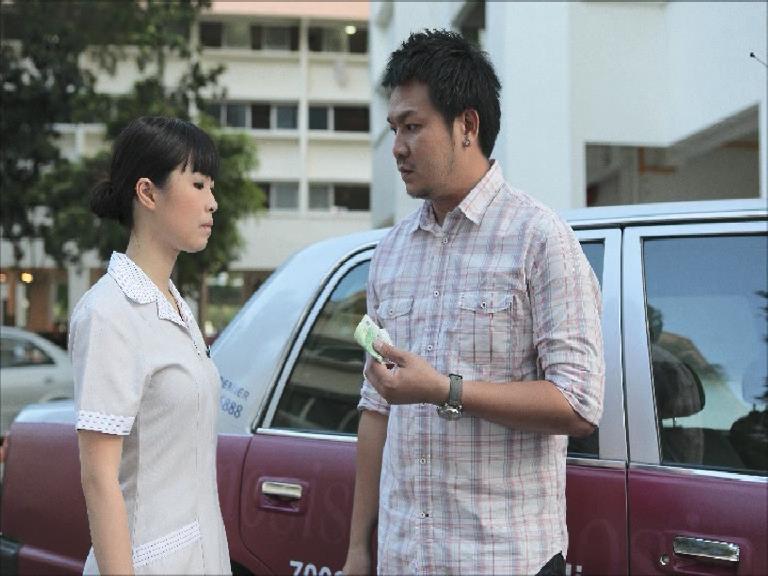 Moo is a clownish 49-year-old bachelor anxious to get married. Not surprisingly, he has problems and even the matchmaking agency he approached regards him with derision. Gao is his friend and colleague. He is a decent, hardworking chap but he doesn’t seem to have much luck with girls and traffic policemen. During his drinking sessions with other taxi drivers, he meets a beer promoter from China – Xiao Hong. Incredibly, Xiao Hong also happens to be a nurse at a local hospital. She serves beer at the coffeeshop to mitigate the depressive mood at the hospital. I guess that’s not too implausible if you’re aware that dentists work as writers too. 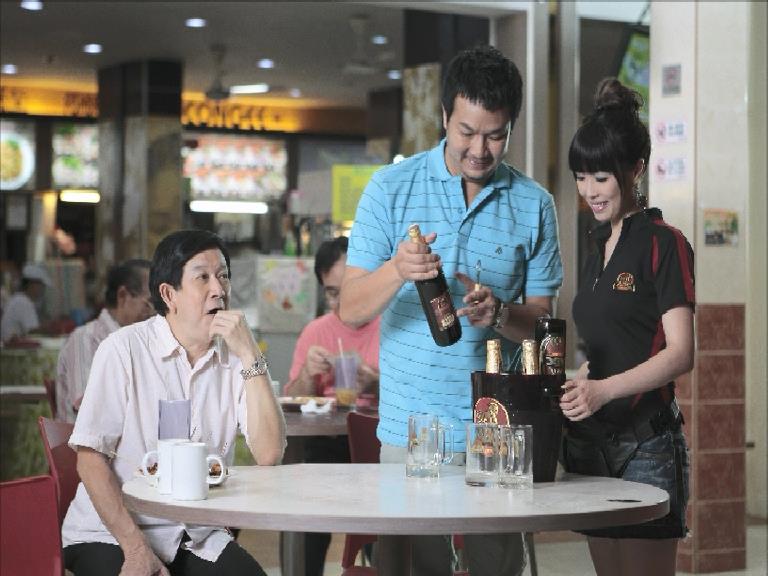 Gao initially mistakes her for some cosplaying prostitute. As in most predictable romance plots, the misunderstanding brings them closer together. The two start going on dates and the relationship flourishes. So far so good. In comparison, Moo’s story seems extremely contrived. He meets a strange girl with a dog (Bubbles). He refuses to take her in his taxi at first, but changes his mind when he realises that the strange girl in her gypsy attire looks like his teenage sweetheart. She takes Moo’s taxi to a forest in Lim Chu Kang where she feeds stray dogs.

Spoiler alert. Don’t read on if you intend to watch the movie. I suggest that you don’t waste your time unless you plan to write a review like me. 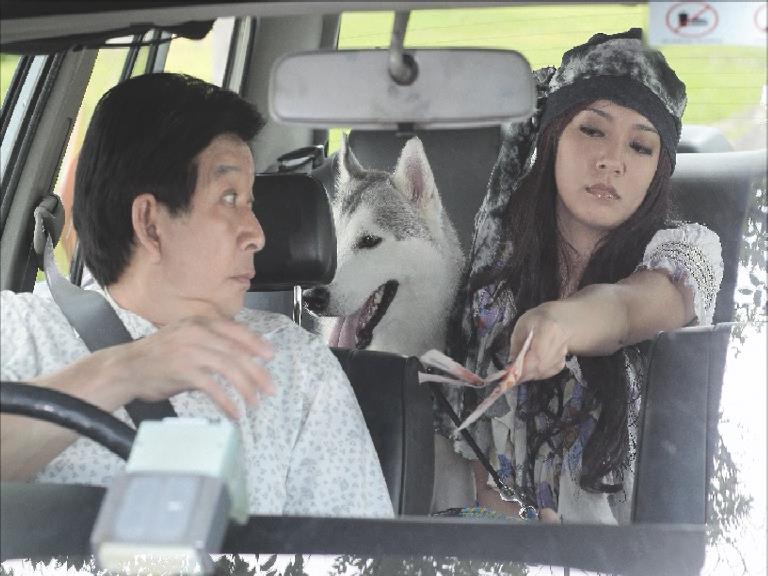 After a few ridiculously coincidental encounters with a quarreling couple, drug dealers and the police, the down-to-earth Moo gets involved with rescuing strays. Folks at the coffee shop make fun of Moo, believing that it’s a case of 老牛吃嫩草. But there is no chemistry between the two at all! The story tries too hard to explain why he is attracted to Xiao Yue – she draws him into that teenage fantasy, but shows no convincing evidence of Xiao Yue being attracted to him. The “romance” between the two of them simply doesn’t make sense.

The story explains Xiao Yue’s eccentricity as being due to a devastating loss she suffered. She used to be stubborn, demanding and self-centered. She had a boyfriend who constantly gave in to her ways, pampering her. They had a wonderful, romantic relationship. Then, one day, she threw tantrums while driving her boyfriend in her car. The vehicle overturned. She survived, but not him. Filled with guilt, she began covering her head with scarfs and caps and went to feed stray dogs every day. Moo drives her to the columbarium to see her late boyfriend. I fail to understand how she can suddenly recover from the trauma and burn her cap.

Meanwhile, Xiao Hong tries to help a dying man meet up with his son who is a CEO in the middle of an important business meeting. The son gets a lecture on filial piety from Nurse Xiao Hong and taxi driver Ah Gao. He complains to the hospital which fires Xiao Hong (I wonder why Mr CEO doesn’t complain to the taxi company). She is forced to return to China. She calls Ah Gao while on her way to the airport. Ah Gao makes a hasty proposal over the phone and urges her to stay. She says she can’t because she misses her family in China. Just as she enters the restricted area, Ah Gao’s mother miraculously turns up with his air ticket and passport. I must say that Jack Lim’s acting nearly saved the day, but the incredulous plot and lame jokes ruined this movie beyond redemption.

While Henry Thia is the lead actor in this movie, his character and Xiao Yue’s weak acting are so weak that they won’t even make it as a joke. Ah Moo is essentially the unsophisticated Henry Thia playing himself. While I have no trouble believing how an eloquent and flamboyant guy like Marcus Chin could have attracted 20-year-old girls, I fail to see the very unlikely “love story” between Ah Moo and a spoilt young lady from a rich family. This romance needs to be “justified” with the appropriate drama. Sadly, that is absent.

The supporting plot between Gao and Xiao Hong is a lot better. If that’s the case, why not make it the main plot? Why use 老牛吃嫩草 as a title when there is no intention of exploring the theme in a meaningful way and make the movie a mind-opener that promote the understanding that people like Marcus Chin are only human?