There is an interesting page on Facebook and it’s called Women Beyond. Apparently, their motto is to empower women. A female friend of mine shared this post on her Facebook. Like a lot of guru quotes, this one sounds speciously like words of wisdom. Even without the bad grammar, it’s one of those things which try to simplify something as complicated as human nature. 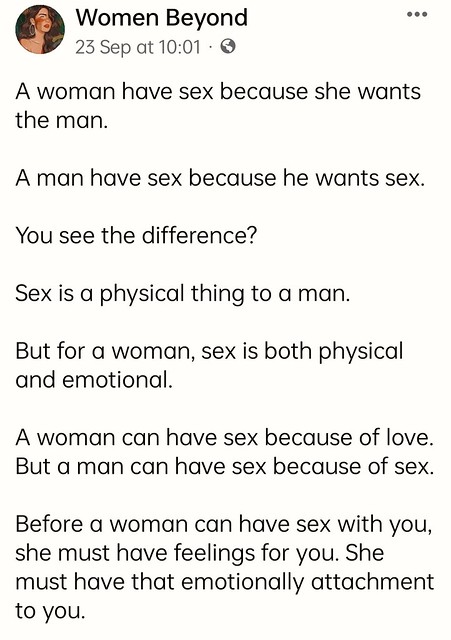 Of course, men are women are different, but are they that different? Let me try to enlighten these clueless “experts”. Saying that men have sex because they just want to have sex is patently untrue. Men are like women in that they have different tastes. Some men avoid junk food at all cost. Some men indulge in it. When a man sees an attractive woman, what does he want? Sex and only sex? Certainly not. He wants the woman to be attracted to him as well. Otherwise, the sexual experience will not be satisfying if it’s not mutually satisfying. If the woman responses positively, then everything goes well. If she’s just pretending, he’s not going to have the time of his life unless she’s an award-winning pretender.

What if he tries to approach someone attractive to him and he gets rejected? He’ll probably try again, change target but there is a limit to a man’s patience. Those who have money may hire a social escort. What does he hope for? Companionship, of course. They could have dinner together and maybe even travel together. He would want to connect with her in more ways than one. Why bother with all that if it’s just for sex? Is the expert at Women Beyond trying to tell us that it really doesn’t matter what kind of woman a man goes on a holiday with and he’s going to totally satisfied as long as there’s sex?

What about those who can’t afford? Then, they may go for prostitutes. There are many categories of prostitution. If you check out some of the websites, they will promote their girls as being able to give that girlfriend effect or feeling or whatever. Why is that a selling point? Because men don’t just want sex!